"In every outthrust headland, in every curving beach, in every grain of sand there is the story of the earth."
« Beach details 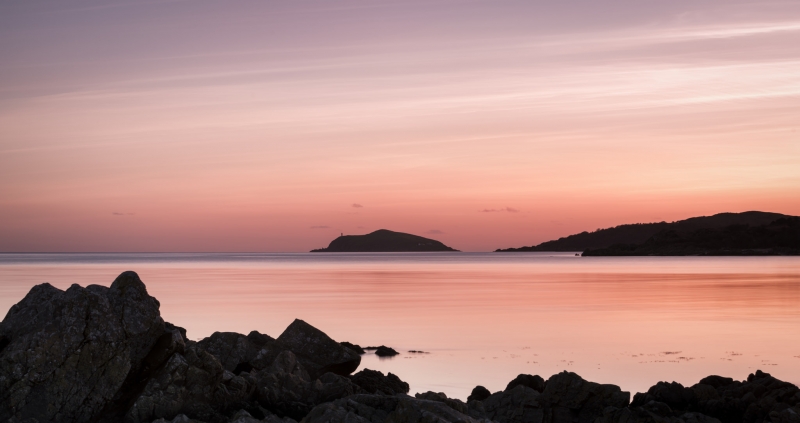 Hestan Island is a small coastal island at the southern foot of the River Urr estuary in the Solway Firth, southwest Scotland. This small island measures approximately 460 by 270 metres (1,510 by 890 feet) and at its highest elevation sits at just over 50 metres (160 feet) above sea level.
The isle of Hestan lies at the mouth of Auchencairn Bay in the region of Dumfries and Galloway in the former county of Kirkcudbrightshire. A lighthouse was built on the eastern side of the island by Alan Stevenson in 1850.
At certain conditions of low tide the island is accessible on foot as there is a natural causeway of shingle and mussels from Almorness Point to the northern tip of Hestan. The island can also be reached on foot from Rockcliffe during the time of spring tides, but requires wading (knee to thigh deep) across the lowest parts of the river Urr out on the mudflats. It is a two-mile walk and, unlike other parts of the Solway mudflats and, say, Morecambe Bay, you can walk faster than the incoming tide if you leave Hestan a bit late.
At the southern tip of the island is the notably-named "Daft Ann's Steps", a series of pinnacles where, legends say, a girl of lesser intelligence attempted to lay stepping stones ahead of her to reach the Balcary Point and drowned.
There are ruins of a manor house built for Edward Balliol near the north of the island.
In the 18th century the island was used as a centre of smuggling activity, with goods being stored in the caves on the south west of the island where there was reputed to have been shelves cut into the rock. Samuel Rutherford Crockett made great play with this in his novel The Raiders.
The island is a popular destination for sea kayakers.
Hestan Island is one of 43 tidal islands that can be walked to from the mainland of Great Britain and one of 17 that can be walked to from the Scottish mainland.