"On Echo Beach, I watch the sun go down"
« Beach details 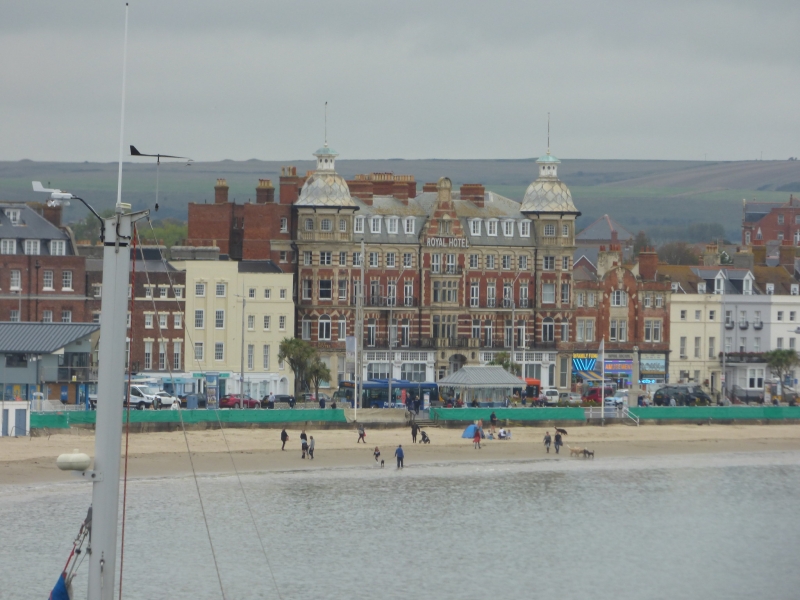 Heading through Nothe Gardens in Weymouth towards Nothe Fort.

Starting from Old Harbour South, we followed the signs, then went up the steps to Nothe Gardens, which in turn led to Nothe Fort.

If you stayed on the lower path, it was part of the South West Coast Path.


Nothe Gardens is a public garden, located in Weymouth, Dorset, England. Positioned on the Nothe Peninsula overlooking both Weymouth and Portland harbours, the informal gardens are often acclaimed to be the most beautiful the borough has to offer.
The gardens include Nothe Fort, built in 1872 to protect Portland's harbour, and today a museum and tourist attraction.

On the coast below the gardens are Stone Pier at the entrance to Weymouth Harbour and Newton's Cove.


Views of Weymouth Beach from Nothe Gardens. There was more views like this from Nothe Fort from the top.

Hotel. Begun 1897, completed 1899, by C Orlando Law. Red
brick, Portland stone dressings, slate and lead roofs.
STYLE: in a vigorous Northern Renaissance style with Flemish
details.
PLAN: the large symmetrical main building has a short return
wing of full height to the right, and is connected by a long,
wide central one-storey lobby, and a former carriage house, to
the ballroom across the back (in Gloucester Mews). The main
staircase, with later inserted lift, lies to the left of the
lobby. The bedrooms are paired to full-width central
corridors.
EXTERIOR: main front is 4 storeys, attics and basement, in
3:4:1:4:3 pattern of fenestration, mainly casements. There are
octagonal end pavilions and a central gabled bay slightly
brought forward; a 'triumphal arch' portico is flanked by
large glazed verandah bays. Four 2-light casement dormers each
side have low pedimented fronts, with returned cornice mould;
at this level the octagons have small-paned lights in arched
heads and decorative tympana, with small paired columns to the
corners, blind balustrade, and deep coved cornice with
brackets to ogee-curve decorative lead cupolas carrying small
turrets with pyramidal capping and flagstaff. The central
gable, with banded brick and stonework and terminal panel, has
small paired deep-set lights with pediment.
The fourth floor lights form a continuous frieze band, with
2-light windows under flat elliptical arches carried on
columns to lion-head corbels below the sill band. At the
corner turrets the treatment is simplified, but with a bold
cornice, and the central unit has 2 deep lights with transom,
under a decorative frieze, and on a railed balcony above a
2-storey curved bow.
Second-floor windows are 2-light, full-depth, with transom,
and under a transom light, with crown-like lintels; these 4
openings each side give to a continuous balcony with flat
elliptical plan, and iron balustrade, above 2 bows at first

floor.
The turrets have plain sashes, and the central bay a stone
flat bow window with curved end lights, and segmental heads,
under a moulded cornice. At first floor are paired bows, each
with 3 pairs of French windows to a continuous balcony with
iron balustrade. At this level the brickwork is banded with
stone, and the windows each have 3 stone voussoirs. The
turrets are similarly treated, but with 2-light windows to
arched heads.
The central bay has a stone bow similar to that at second
floor. The central portico on 6 steps with nosings has paired
Ionic columns to a central elliptical arch with keystone,
flanked by vertical oval oculi, and to a moulded cornice, with
balcony rail and stone balustrade above. This covers C20
glazed doors with original paned side-lights, and column
responds, echoing the outer detail. To each side are 2 wide
bays, divided by paired pilasters, with 3 small-pane transom
lights forming a frieze above 4 vertical panes; the end lights
are bowed, with curved glass.
Below the main glazing are panels of rich cast-iron work, with
sunburst and ship motifs, below which are open balustrades
giving some light to the basement windows set back below. The
turrets at ground floor have plain sashes with pediments, and
a canted light connects with the main glazing.
The return wing has a series of 2-light dormers above a stone
eaves course and a deep plain frieze, and several deep stacks
in brick with some stone banding. Set back to left of street
front is a single bay with wide carriage arch.
The rear wall has 3 bays to the left of the staircase, with 3
dormers, and a further 2 on the return wing. Large 3-light
casements with transom, and to segmental heads, at staggered
levels, light the staircase, which has been raised to a lift
housing. To the right are 5 regular bays in 5 storeys, to
parapet, with 4-pane sashes to segmental heads.
INTERIOR: the central lobby has 4 bays of compartmental
ceiling to plaster moulded beams and enrichment, on 3 pairs of
free-standing Ionic columns to high podia, then a flat
segmental-vaulted deep room which ends with a large stone
fireplace with a dragon in high relief above the arched fire
opening. To right in the front lobby is a fireplace in dark
veined marble, with mantelshelf on paired brackets. To left is
the stair well with quarter landings, good turned newels and
balustrades, and dentil cornices. At the main floor landings
wide elliptical arches give to the corridors. Most doors are
original, with 6-panel (arranged as 1 over 2,1 and 2) to the
lower floors, and 4 panel above.
At the rear of the main hotel, with frontage to Gloucester

Mews, is the former Queen's Ballroom. Brick, with some stone
dressings, and hipped slate roof. One storey, in 7 bays
divided by brick pilasters, paired at the ends, and stepped
brick eaves course. 6 of the bays have large arched openings,
with triple keystone, over 3-light windows with 3 transom
levels, and arched heads to the lowest lights. Stone bands to
the jambs are not carried through the pilasters; moulded stone
sills are on brackets. Bay 2 contains a wide pair of doors
with small-pane side lights and overlight under a moulded
segmental hood on pilasters in bold Art Nouveau form. Above
the door are 3 small 6-pane lights to a continuous sill band.
INTERIOR: not inspected.
This is a forceful building, in the manner of Richard Norman
Shaw's more monumental work in this style and demonstrating a
characteristic late Victorian approach to urban development. A
plaque on the front records that it is on the site of the
former Royal Hotel patronised by George III. In the lobby is a
stone panel, set into the reception desk, inscribed: The
foundation stone of the Royal Hotel Weymouth was laid on 22
April 1897 by Charles Jesty Esq., Mayor. Opened 16 May 1899'